Progress as a trap. 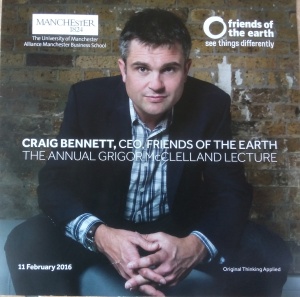 Craig Bennett is the Chief Executive of Friends of the Earth UK. Last night (11/2/2016) he gave a lecture at Manchester Business School, “What is Progress: how are we doing and where next?” It was an interesting topic for a largely business-orientated audience and the lecture was eloquently delivered.

A look at definitions of “progress” highlighted, following Sidney Pollard, the idea of irreversible changes in one direction leading to improvement. The idea of progress is an ideology of relatively recent origin. Craig might have noted the intimate connection of “progress” with the Eurocentric world view, itself rooted in the colonial domination of other “less valuable” humans, and of nature, an ideological nexus going back 500 years or so. This would suggest that the problem has rather deeper roots than those of either the enlightenment or industrial revolution.

However, he then went on, this time drawing on Ronald Wright’s Short History of Progress, to identify a potentially very helpful concept, that of Progress Traps: “seductive trail of successes that may end in a trap where we cannot survive without the technology”, or perhaps more accurately, where the technology creates intractable problems while tending to close off alternative solutions or exits. Craig identified three particular important ones for our times:

Now by his articulation of this last trap, I would say that Craig placed himself firmly in the degrowth camp, a movement that is indeed growing in its adherents and its persuasiveness. The concept of Progress Traps, which I had not come across before, seems to me to be just the kind of concept that we can use to popularise the understanding that we have to collectively find another way, with an alternative perspective on what is most important and a strategy for how to get there. It is easy to understand, easy to illustrate, and it directly identifies the need for a change in direction rather than a technological adjustment to the current course.

Where I was less convinced was with Craig’s attempt to rescue the idea of progress. He used Maslow’s set of human needs as a set of criteria for what he called “Real Progress”, but he might as well have spoken of conviviality, right livelihoods, common wealth, or of the social and solidarity society and economy (or come to that The Viable Economy. Had he explored some alternative conceptions of a decent society, in keeping with its ecological base, then he might have indeed spoken about degrowth, ecological swaraj, ubuntu or buen vivir. For all these conceptions the notion of a linear conception from a less developed to a more developed state is very suspect, resting on a narrow means-ends rationality (ill suited to the systemic, recursive, open, emergent and unpredictable complexity of ecological, planetary and human systems) and most likely rooted in the politics of exploitation-domination.

But then this was a business audience and there is a limit to what can be said and heard. As it was the reception seemed sympathetic, something I would not have predicted five years ago: this indicates what a parlous state we are in politically, socially, environmentally and economically.

2 Responses to Progress as a trap.