Ickenham village centre with its pump

In London for a few days helping out with the morning school run and catching up with daughter and granddaughter, I made an excursion to Ickenham in what was Middlesex, now in the outer London borough of Hillingdon.  Why?  It’s the village where my dad grew up and I was curious to see it again, wondering whether I remembered anything of it.  I was last there (save a flying visit in 1966 before we departed to Ireland) when my paternal grandmother died in March 1956 (I was only 4), eleven months after my grandfather.

My granddad Henry Ablett Burton moved to Ickenham when the Metropolitan line went out there, it being then a halt, two stops before the end of the line at Uxbridge.  He commuted to Mount Pleasant post office to work as a customs officer.   The new suburban railway led to a sustained wave of house building and the eventual transformation of a rural community into another suburb. I was on one of the new fleet of trains that like metro systems elsewhere have continuous rather than separated coaches giving a lot more capacity.  I much prefer these trains that only go underground on the cut and cover basis, as opposed to the peculiarly London deep tubes that are so claustrophobic, and limited in terms of their scope for expansion – hence Crossrail.

On emerging from the station there is something of a country and village feel to the place.  Walking into the village I recognised the pump, in its bandstand like canopy – it was the bequest of a philanthropist in the mid C19th and the first source of safe water for the villagers.  And, though you never can be sure since memory is a process of multiple reconstructions, the village pond, still there, looked familiar too.

The house (Oaklands) is gone which is a great shame, now the site for 2 blocks of flats.  My granddad had a big garden, and was, like my dad a great producer of fruit and vegetables.  I remember the Anderson shelter which became the garden shed and apple store – I distinctly remember the smell of apples: maybe that’s why I’m so keen on my own crop.

My Dad remembered Granddad collecting horse manure in his heavy wooden wheelbarrow on the main road, helping him with his toy barrow.  that would be around 1926 – activity that would be suicidal today (see photo).

The main road through Ickenham: not somewhere to gather horse manure these days.

Woodland near where my grandparents lived – site for some of my Dad’s childhood stories.

On the other side of the village is the other station, now West Ruislip – the end of the Central line and also a stop on the Chiltern line, while fast Great Western trains also tear through.  I remember getting the train to London to visit the National Gallery and some other sites – we had the postcards my Dad bought, framed by the picture framer at Edith Walk, Malvern, on the wall in the hall for years – a Van Eyck and a French impressionist I think.  I was more interested in the revolving doors which deposited me in the street to my great panic while he was buying them.  I can’t have been more than four.  But I do remember the Metropolitan line trains being rusty brown on the outside, and also going to Uxbridge which had the novelty of being the end of the line. 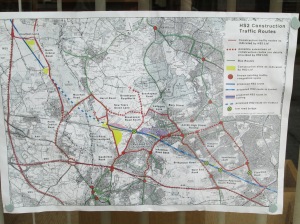 Poster at the library with details of the HS2 construction plans.

But to the north of the village the HS2, high speed route will go, and it was clear that there is  lively campaign there against it.  I found their very thorough environmental impact assessment.  What an irony that a community that owes its existence to the railway expansion of the early 20th century should have its remaining village character threatened by what many see as a vanity railway mania project of the early 21st century.

The Metropolitan and Piccadilly Lines at Ickenham 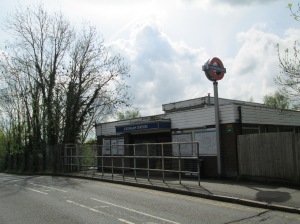