Sunday and I joined the rally against iGas’s exploratory drilling for shale gas and coal bed methane at Barton Moss near Eccles, just across the Ship Canal from here. 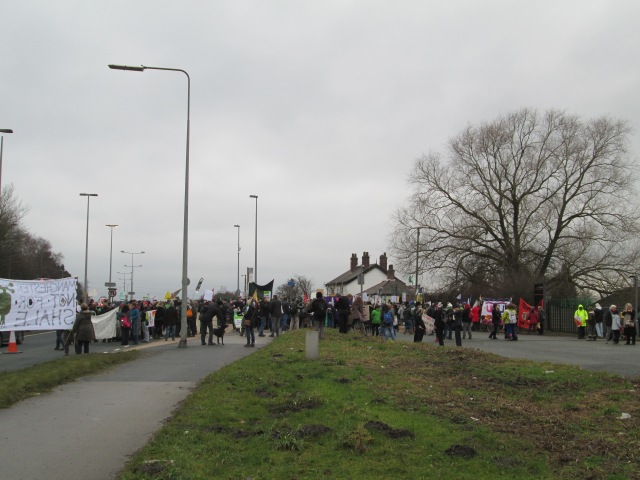 The rally outside the iGas site

It was a good turnout – my estimate is around 400 but the BBC in otherwise good coverage on last night’s BBC1 regional news said (I think) 200.  The Manchester Evening News has also given neutral coverage this time.  They also report (in an inappropriately headlined piece) on the reckless behaviour of three lorry drivers at the ongoing protest today.

It was cold – I always find it a bit miserable marching and I left once the speeches started (couldn’t hear them) – but the important thing was the very respectable level of support for this vital campaign.  It was good also to see support from both the green movement (as expected) but also from local trades unions.  It is important to build this working between the two movements.

The struggle against the frackers and this objectively climate denialist government will be a long and big one.  It is vital that it becomes better organised and uses the most creative strategies and tactics possible to outflank these well resourced and utterly destructive interests.