Well this review has saved me the job of writing a post on El Sueño Existe (The Dream Lives On).
It captures very well the unique feel of the festival which, at 40 years after the imperio-fascist coup in Chile against the elected Popular Unity government of Salvador Allende, was particularly intense – sad and inspiring at the same time.
Musically there were some fine moments – unjust to single some out, but I will anyway.  Then young boy who sang Victor Jara’s always moving ‘Manifiesto’, accompanying himself on guitar, on the first night, and indeed all the children in that part of the concert with their dancing and singing. 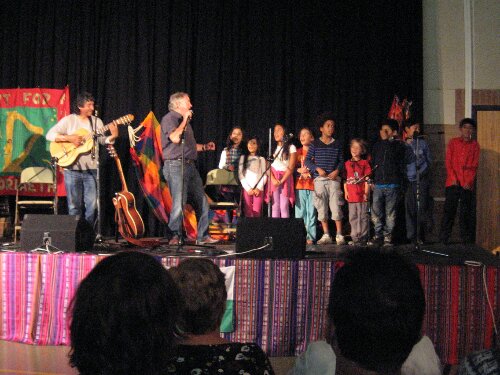 Alejandro Reyes, an early collaborator with Victor, with his son and grandson, demonstrating the folk roots of Victor’s ‘El Cigarrito’, the exuberance of the Saturday Night concert, despite the bass player falling off the narrow stage (luckily not seriously hurt), and the ‘discoveries’  of the festival, Valentina y Voces del Sur and Corina – both with fantastically rich voices and engaging stage presences, switching from nueva canción to tango and milonga.
Politically speaking, the music was so good that I only went to two workshops (imagine that!).  One on ‘keeping the dream alive’ had an interesting mix on that included Chile, Venezuela and Bolivia.  There was something of a disagreement between those of us, very supportive of the ALBA governments of Venezuela, Ecuador, Bolivia, Nicaragua in their social justice and redistribution policies, but critical of its dependence on primary extraction (hydrocarbons, minerals, agro-industry) which goes against the notion of endogenous development nd de-linking from the global system, on the one hand, and those (well one of them?) who stuck to the old two step formula of the environment later once the revolution is secure.  They have a good case to make – the US and its allied forces and interests have been using the environmental movement as one tool in subversion and destabilisation.  But the ecological stakes are so high now that we can’t wait for ecological and climate justice.  That’s why figures like Alberto Acosta in Ecuador and Pablo Solón in Bolivia hve detached themselves from the respective governments, the most interesting and progressive governments in the region.  The ‘revolution’ has to embody a different relationship with the ecosystem, just as it has to prefigure a different relationship with indigenous and African heritage people, with women (Comp Ortega), with children and between the State and the people.  Otherwise the mistakes of 20th century socialism will repeat in the 21st.
Oh look I’ve written a blog post after all.